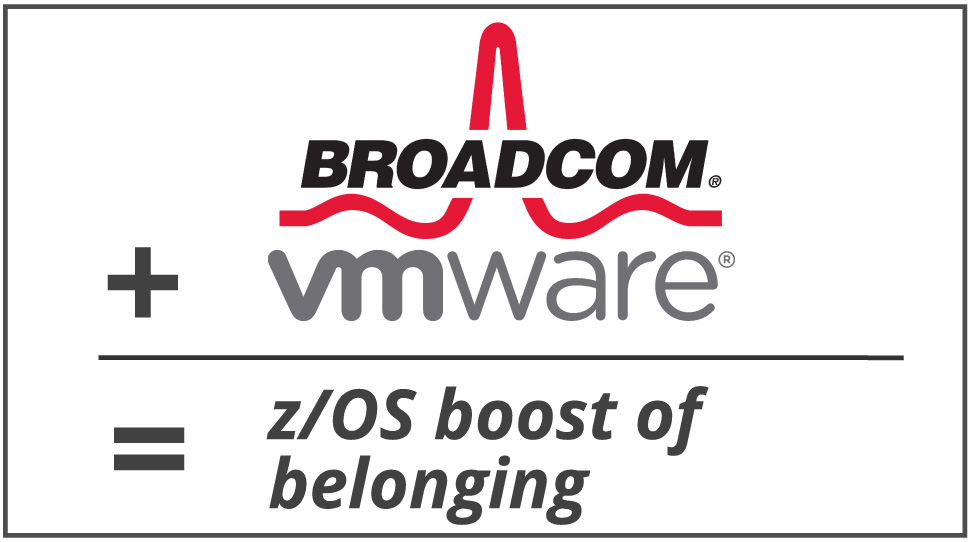 Software giant Broadcom’s recent announcement to acquire VMware is obviously significant, but where the mainframe is concerned, the acquisition is monumental. Known traditionally for its semiconductor and infrastructure software solutions, Broadcom is more widely known within the mainframe community for its acquisition of mainframe software icon CA Technologies in 2018, for just under $19 billion. Looking back at the intersection of recent big-news acquisitions paints a very positive picture of Big Iron’s future, in spite of the talk in various IT circles about its demise. Take for instance:

Check out or app for z/OS p/w management.

I think we have to recognize that one of the ways that humanity functions most effectively is when we’re keeping an eye on each other and encouraging each other to behave, and the mainframe has that built into its very ecosystem.

If you search on VMware.com for “mainframe” the first article that comes up is “How to Migrate Applications Off a Mainframe;” that’s right, first article. I’ve been in the mainframe space 14 years, general tech space about 25 years. VMware has never been associated as a complement to z/OS. Other articles in this “mainframe” search support this take with phrases in the search results such as “mothball mainframe” and “journey from the mainframe” and other similar takes. With Broadcom’s acquisition, the mainframe is definitely here to stay and complement VMware in the cloud powering high transacting workloads. It is simply the right transactional computing system for large enterprise and government. The mainframe is here to stay, and its value cannot be overstated. It is worth noting that when before IBM launched the s/360 in 1964, the company invested $5 billion into research and development, a sum in today’s dollars worth more than $50 billion. I found no number for R&D poured into the z16, but with its speed and workload capability, it is undoubtedly a tidy sum.

How valuable is the mainframe today?

Santa Rosa Software and the Mainframe

At Santa Rosa Software we too are fully vested in the mainframe and believe its most impactful years lie still ahead. We believe the next generation of mainframer will be looking for innovation and convenience in better applications for mobile and the enterprise. Our first mobile application built for this new wave of mainframer is the KhyberPass™ password manager for IBM z/OS. If you know the facilities that manage z/OS security – RACF, ACF2, and TSS – you know the unique policies for password management on the platform. In many enterprises with z/OS, it takes a helpdesk resource to assist end-users’ management of passwords on the mainframe: “You must have this numeric here. You must have this alpha here and it must be capitalized. You can’t have consecutive sequential or duplicate characters. WHAT IS THE POLICY and HOW DO I MANAGE THIS?”

KhyberPass™ removes the burden of z/OS password management by storing specific policy configurations in the mobile device and managing prompts to update passwords with the right rules for simple, fast password changes. More info on KhyberPass™ can be found at https://santarosasoftware.com. KhyberPass™ can also be found on the Google Appstore here. An iOS version is in development and will be in production later this year.

This site uses Akismet to reduce spam. Learn how your comment data is processed.